To Be a Spy: A Christmas Spy Series Short Story by @JessieClever #Romance 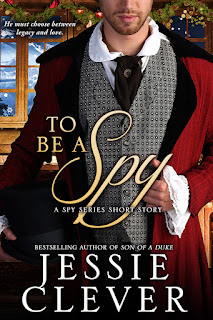 To Be a Spy: A Christmas Spy Series Short Story by Jessie Clever

Samuel Black must make a decision: to be a spy like his father or follow his heart.

Either is likely to give his mother chest pains.

For Samuel is no longer a lad with the ambitious and noble wish of being a lamplighter to keep the seedy streets of London safe.  About to embark on university, his mind stirs with the thoughts of creating a policing force in London to safeguard its citizens.  Held back by his family’s legacy as spies, Samuel does not make his ideas known.

But when he stops a would-be purse-snatcher, his path unexpectedly veers into that of one Miss Penelope Paiget, and suddenly, Samuel must make a choice.

It happened on Marlborough Street a little past two o’clock two days before Christmas.
Samuel had just returned from Eton the day before as his Greek studies had compelled him to stay longer than the rest of the students.  It all sounded rather dull, but honestly, it was quite thrilling as one of his tutors believed he had stumbled upon an undiscovered Biblical text.  The ramifications could be enormous, and so when asked to assist him in analyzing the text, Samuel had stayed on, of course.  It wasn’t as if he would miss the opportunity.
And thus two days before Christmas, he found himself on Marlborough trying desperately to find a present for Jane and Elizabeth.  He wondered briefly if any other man of ten and eighteen was stricken with not just one headstrong sister but two for whom to shop, and if those sisters were raised by an equally headstrong mother.  All three of them would not settle for the customary ribbons or baubles or fabrics that other ladies would surely drool over.  If it were anything less than divine, the Black women would not find it at all appealing.
Samuel stared in one window after another hoping inspiration would strike.  It was while waiting for inspiration that the crime was committed.
He was standing innocently enough outside of Rugbottom’s Books admiring a particularly ornate illustration of Shakespeare’s sonnets when the commotion began behind him.  Having been raised in less than ordinary circumstances, the time that lapsed between when the commotion began and when Samuel noticed it was rather exaggerated.  But commotions were quite common in the Black family, and he thought nothing of it.
Until Lady Delia Witherspoon screamed.
“He’s stolen my reticule!”
Samuel turned at this in time to see Lady Witherspoon pointing at a fleeing figure clutching the offended reticule under his arm.
And then Lady Witherspoon screamed again.
“That man!  He’s stolen my reticule!”
The fleeing man charged at Samuel directly, as it was previously noted, Samuel merely stood in the middle of the pavement staring into a window.  He was obviously ripe for any interaction with a passerby on the pavement, even should that passerby be a thief.
As he watched the thief approach, Samuel’s mind took that opportunity to think on matters.  He wondered briefly if other gentlemen stepped out of the way of fleeing criminals or if they advanced.  He wondered if they cowered at the thought of getting their waistcoat ruined.  And then he wondered what the wives of said gentlemen would think if their noble husbands did not act to avenge the slight against a lady.
Samuel thought none of that likely as the gentlemen of the ton that he had had the pleasure of meeting were all sopping idiots.  The apprehension of criminals was not something that suited such personalities.
And then Samuel sighed.
He sighed because he quite liked his waistcoat.  It was a fine cranberry color that went well with his breeches, and if he had learned anything from his Uncle Alec, it was that a man who showed care for his dress showed care in every aspect of his life.  And that was why Samuel was rather despondent to put his cranberry waistcoat in danger.

Jessie decided to become a writer because the job of Indiana Jones was already filled.

Taking her history degree dangerously, Jessie tells the stories of courageous heroines, the men who dared to love them, and the world that tried to defeat them.

Jessie makes her home in the great state of New Hampshire where she lives with her husband and two very opinionated Basset Hounds.  For more, visit her website at jessieclever.com.

Email ThisBlogThis!Share to TwitterShare to FacebookShare to Pinterest
Labels: Jessie Clever, romance, To Be a Spy: A Christmas Spy Series Short Story