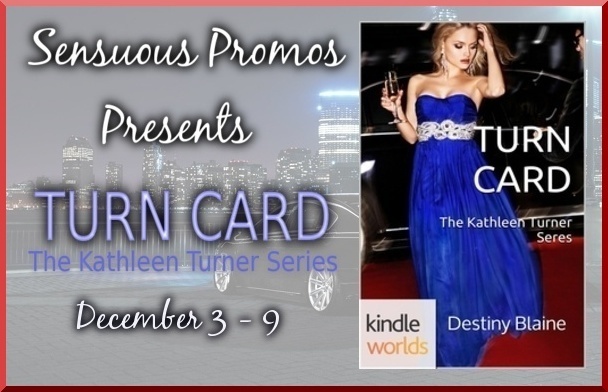 ~Not everyone plays by the rules~
Kade Dennon tried to stay away from his brother’s girlfriend and remain loyal to the only family he’s ever known but Kathleen Turner is his forbidden fruit. Eventually temptation drags Kade back to Indianapolis and the one woman who feels like home.
~The players changed but the game remains the same~
Kathleen Turner knows what she wants and who she desires. She seizes a new job and an opportunity unfolds. Soon, she’s working with her boyfriend’s brother and nothing will ever be the same again when Kade stakes a claim and aims for Kathleen’s heart.
~It's impossible to break a player who refuses to lose~
Blane Kirk needs his brother Kade to keep his girlfriend safe but when Blane sends Kathleen out of Indianapolis to protect her, he has no idea what kind of danger Kade and Kathleen will find while testing a new Las Vegas casino loyalty program. When an old enemy resurfaces with threats and an agenda, Blane goes to Sin City to warn his brother and discovers a few unwanted surprises of his own.
~A house of cards now destined to fall~
Working side by side, Kathleen’s and Kade’s relationship quickly changes, a fact they can’t deny. Seduction and passion lead them to a night that will scorch the sand right off the Mohave Desert and this time, foreplay won’t sustain them. With no one to stop them, Kade and Kathleen tread into the realms of unforgivable betrayal. And when Blane arrives in Vegas, he realizes too late that his brother is now playing for keeps.

Can you tell us a little bit about where you are from?
I was “born and raised” in small town Church Hill, Tennessee. After a couple of years in Columbia, Missouri, I returned to East Tennessee.  Now, my husband and I spend a lot of time in between Navy bases in Connecticut and Virginia so we can stay close to our granddoll.
What does your writing desk look like? What would we find on it right this minute?
When our children still resided at home, my husband built an office-cabin so I could get away from the noise and they could still “be teenagers” so my office is about thirty-steps from our back deck. My desk is generally cluttered with contracts, research pulled from the internet, books and outlines. You can always find family photos and a cup of coffee nearby along with several computers, monitors, notepads, and pens.
Do you have any news you’d like to share with us?
My two new YA titles are now available at select retailers as preorder options, which is pretty exciting.  One of my pseudonyms just released a Christmas novella found at Kindle Worlds.
On the daily work front, I’m polishing old titles that were recently pulled from one of my publishers. If any publishers are in need of edited backlist works, I’m open to offers but will likely self-publish these. Lastly, I’m researching the medieval era for a ghostwriting assignment.
At what point did you first consider yourself a writer?
I’ve always known that I’m a writer. I began to think of myself as a serious working writer when one of my ghostwriting retainers was more than enough to pay my house payment for a year. That was a crucial turning point because we still had young children at home so it was a big deal to have that verification of “Hey, you can probably earn a living at this.”
What inspired you to write your first book?
I can’t really go back and pinpoint one certain reason that I started writing. Like so many other writers, I grew up on Trixie Belden and Nancy Drew. A variety of books were always at our fingertips since my grandmother worked for Grosset and Dunlap Publishing, which is now part of the Penguin Group.
Do you have a specific writing style? In other words, are you a plotter or a pantser?
At one time, I was definitely a pantser. Now, it drives me crazy if I don’t have an outline.
How much of your book(s) have a bit of you in the characters?
Growing up on Sunday, because of the story, has a bit of me in one of the main characters.
What books have most influenced your life most? (This can be professional or personal life influence)
Over the course of my career,  James Patterson, John Grisham, Tom Clancy, and Sidney Sheldon influenced my writing with their works. Their books remain with readers for a lifetime.
If you had to choose, which writer would you consider a mentor?
I don’t think anyone would put up with me now. I’m too set in my ways. If the opportunity were there, I would ask someone like Stephen King or John Grisham.
In the past, when I’ve been approached about mentoring other authors, I’m pretty cautious. I would imagine that mentoring is something that gives all writers pause because mentoring is a big responsibility and takes a lot of time if it is approached in the right manner.
When and if a writer chooses a mentor, it’s important to find someone who far exceeds where you are as a writer otherwise it’s difficult to learn from them on a continual basis. You want to “study” with those who have mastered the craft and have the sales and/or experience to back it up.
What book would we find you reading right now?
I just finished reading Throne of Glass by Sarah J. Maas—which is phenomenal.
Are there any new authors that have grasped your interest?
Sarah J. Maas is new-to-me and now one of my favorite authors. Highly recommend her Throne of Glass series.
What are you currently working on? Can you give us a sneak peek?
I’m working on several projects right now. Gatekeepers and Legends, two YA novels are set to launch March 1st and are now available at select third parties for pre-order. The stories have unraveled much better than I could’ve ever imagined and it looks like a YA publisher may pick up Gatekeepers prior to its official release which would be kind of neat. It’s sold well in preorders, from what we can tell, so we’re excited about it.
You can find Legends and Gatekeepers at Kobo or iTunes and coming soon to other third party venues as well. In addition to YA works, I’m wrapping up a sports fiction manuscript, Growing up on Sunday, which is loosely based on a true story. Limited clips are posted at Twitter: @DestinyBlaine clips. A few other excerpts will pop up as well, but Growing up on Sunday clips should be easily located. I’m also wrapping up the final book in the Love Bites Back trilogy for The Vampire Diaries at Kindle Worlds.
Do you see writing as a career? Do you write full time? Or in addition to another job?
Writing has been my full-time career for well over a decade.
Can you share a little of your current work with us?
Sure, Below is a short clip from the recently released Turn Card, a Kathleen Turner at Kindle Worlds novel

Do you have anything else you’d like to add?
I do actually. There’s this underlying belief that writers should not respond to reviews. The fact is, if you are attacked—personally attacked (or worse and your family is attacked)—then you should respond in a professional manner. If you don’t respond, the only thing the next reader may see is that ONE reviewer’s opinion. If that person is spieling lies and you do nothing, then you are giving someone else the power that they do not deserve. By all means, fight back when the review is designed to hurt you or your family. My children were often hurt by reviews and that wasn’t fair to them and I should’ve protected them more.
As author/readers/professionals, we should all join together and support the books that are attacked in such a ridiculous manner. They’re often among the best books on the shelves. Just food for thought.

For more than a decade, Destiny Blaine and her pseudonyms have earned the coveted #1 spot in over half of Amazon's sub-categories. Her international bestsellers have landed in the top 20 in many categories at Amazon, Amazon UK, Amazon CA and Amazon Australia. With more than 300 titles on the market today, Destiny is widely known as a sprint writer and currently writes under seven active pen names.
In 2015, Destiny will release more than 22 novels and novellas. She still takes on the occasional ghostwriting project and is represented by Dawn Dowdle of Blue Ridge Literary Agency.
Married for almost 25 years, Destiny and her husband have two grown children and love their empty nest. They spend a lot of time with their granddoll in Connecticut and Virginia Beach.
When Destiny isn't writing, she can be found watching a football game, attending music festivals and book events, or playing casino craps and poker at one of her favorite casinos.

Don't forget to stop at the other hosts for this tour so you don't miss a single peek into this book or what this author has to offer!

Posted by Nicole Morgan at 2:00 AM