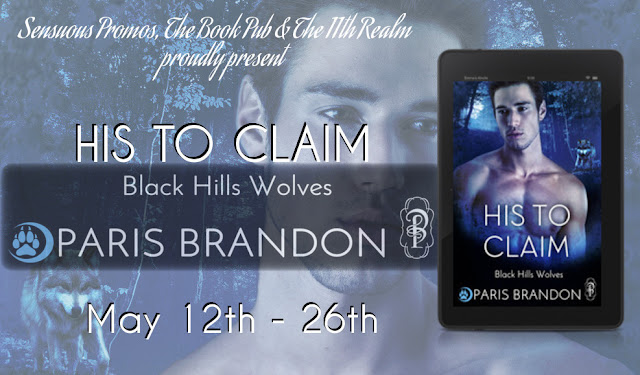 If you’re a newcomer to the Black Hills Wolves community of Los Lobos, welcome! If you’re a long-time reader, I hope my second story will live up to the evolving world that the creative authors in this series have continued to expand. I am truly thankful for being included.

After I finished my first Black Hills Wolves story, His to Protect, one of the characters wouldn’t leave me alone. No, there weren’t any handsome hunks besides Gunnar Redmond hanging around begging for their own story. Instead, a secondary character who happened to be a seething mass of rage dared me to peel away the layers and see the real man. Ray Decker appeared briefly in His to Protect, but every character has a story and his includes a son, J.D., the hero of His to Claim.

Being an author is a little like being a detective, and with each book, uncovering secrets and discovering what makes my characters tick usually becomes an addictive adventure. Trust me, there were mornings I couldn’t wait to get to the computer. The characters took me down a few dark roads but I’m a great believer in the strength of the human spirit, and above all, love and forgiveness. I hope you enjoy their journey! 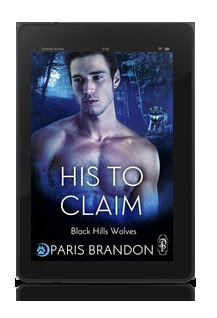 He’s home to find the truth…

Once he’s over the initial shock of hearing his father hasn’t been dead for the past twelve years, J.D. Decker vacillates between joy and anger until he returns to Los Lobos and finds the man who sent him away threatening Bree Redmond, the only other person he’s ever cared about as much.

After years of living under a harsh alpha, Bree Redmond is intent on experiencing everything life has to offer, and ignoring her family’s wishes that she settle on a mate and help rebuild the Tao pack. When J.D. Decker jumps out of his truck, and back into her life, she realizes why she’s never been eager to settle.

They aren’t kids anymore and J.D. has Bree howling at the moon and questioning her desire for nothing more than a sexy romp in the woods. He’s a blunt force and rough around the edges, but he ignites all of her deepest desires with his single-minded determination to make her his.

Bree’s family isn’t happy about her budding romance with the son of a man they feel is responsible for the death of one of their own. Old wounds are reopened and as tempers flare Bree must decide whether to let a dark secret from the past separate them, or defy her family and accept J.D.’s claiming.

An aged, rust-pitted, light-blue pickup with a black hood and green driver’s side door, with a dirty, white camper shell covering its bed, turned into the yard. The thing appeared to be held together with bubblegum and baling wire. The windshield wipers had swiped a mud-streaked half-moon and must have allowed the driver to see at least a portion of the road and enough of the yard to stop before he reached the porch steps.
The driver, nostrils flaring, barreled out of the truck as soon as the engine died. Bree glanced at the lean, dark-haired man wearing worn jeans and a clean white T-shirt, and experienced an unsettling moment of instant recognition. The same dark, curly lashes surrounded his smoky topaz eyes, but time had carved cheekbones into the youthful face she hadn’t seen in twelve years.
His mouth worked for a few seconds, and then he yelled, “What the fucking hell!”
Wherever he’d been, he’d acquired some interesting vocabulary skills.
His fist still raised, Ray glared at the interloper, and she knew he didn’t realize who’d challenged him.
“Jacob Donovan Decker.” She sounded like a schoolmarm addressing him by his given name instead of J.D., but she would have done anything to break the tension.
Ray’s glare withered. He lowered his arm and smoothed his good hand over the wrinkled placket of his grubby, dirt-brown flannel shirt, but nothing would make it cleaner or less wrinkled. He opened his mouth. Nothing came out but a short, shallow hiss. A study in abject misery, he slumped against the battered screen door and hung his head. His chest heaved in an attempt to stifle a sob.
J.D.’s confused gaze settled on her for a moment, and he raised one dark brow. “Hello, Briana Hortensia Redmond. You want to step off of the porch and tell me what the hell is going on here?”
“We were discussing the merits of being neighborly. If you want to know anything else, you’re going to need to ask your father.”
She sidestepped the hamper, and Ray mumbled, “Take your stuff,” as she passed.
“J.D. can return the basket when you’re finished. There’s plenty for both of you.”
He slipped inside the cabin and let the screen door whoosh shut behind him.
Without being able to focus on Ray, she didn’t have an excuse for avoiding the calculating gaze of J.D. Decker. Judging by his expression, he hadn’t forgotten how, when she’d turned twelve, she’d caught him skinny-dipping and stolen his clothes. Of course, she hadn’t forgotten he’d planted a sign in her front yard declaring she had freckles on her butt, either. Their war had lasted all summer. By the time fall had arrived, their childhoods had been swept away by a budding attraction neither had acknowledged and the reality of how dangerous life in the Tao pack had become.
“Where have you been?”
“Wherever I could find work and someplace to run. Imagine my surprise when Drew Tao tracked me down and told me my father needed me. Something the man himself has never bothered to do,” he shouted, loud enough for someone in the next county to hear.
She glanced at the door but couldn’t see Ray. “Look, things got bad around here for a long time. After you left—”
“He sent me away.” Ray had never explained J.D.’s disappearance, but it had probably kept him safe during those mad, bad times.
“Then you were lucky.”
His angular jaw firmed, and she got a glimpse of how handsome Ray must have been at twenty-five. “I’ve spent twelve years thinking the only reason he didn’t come after me was because he was dead. Still think I’m lucky?” His fury simmered below the surface.
She couldn’t imagine coping with the pain of losing a parent now, let alone when she’d been a kid, but he’d missed the point. “Since you’ve been gone, we’ve all learned to be grateful for every piece of happiness we could manage, so yes, I think you’re lucky. You still have a father you thought you’d lost, but he needs help. He isn’t eating, and I don’t think he’s sleeping. I thought I was making a little headway by getting him to accept an occasional pot of soup or plate of cookies, but I guess not.”
He frowned, and his gaze drifted toward the cabin. “How long has he been like this?”
“Since Luna Sinclair came home.”
“What’s Luna Sinclair got to do with all of this? Drew would only tell me he had part of the story, and he wants it all.”
“I suggest you ask Ray. Without his side, anything I tell you would only be speculation, and I think he deserves more.”
“Did it occur to any of you his part of the story might be a place to start?”
“Has it occurred to you only knowing part of the story might be the problem?”

Thank you for stopping by today and if you leave a comment you will be entered to win one of my backlist titles or a $5 Amazon Gift Card. At the end of the blog tour, I will choose two names from the list of commenters to receive a copy of His To Claim.
Happy Reading!
Paris Brandon

Enter to Win
Either a book from Paris' backlist or $5 Amazon GC
Leave a comment below and tell Paris what you think of her new release!

Posted by Nicole Morgan at 5:00 PM