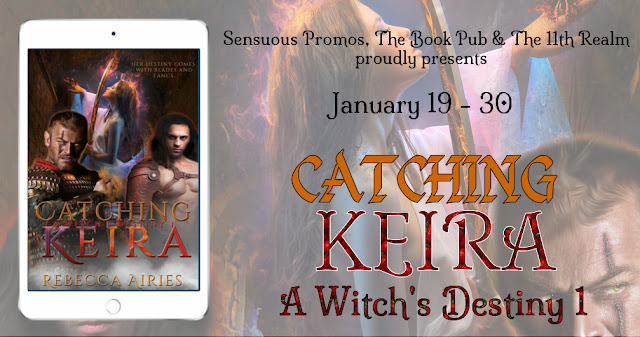 Her destiny comes with blades and fangs.

Catching Keira is a re-release. It has been heavily edited and retitled.

Her goal: reclaim an amulet and go home

Keira A’Darcin doesn’t need distractions. An encounter with gorgeous, dragon warrior Rath  tempts her to put aside her worries and enjoy a night in his arms. When morning comes, duty leads her away from him. As she continues on her journey, danger forces her to claim a pair of ancient weapons, changing her life.

Rath hunts the dark sorcerer targeting cities under dragon protection. His search leads him to a trap and then to Keira. Intense attraction burns between him and the sexy witch. Every touch makes him wonder if she’s the one for him and Damon?

In the last few weeks, vampire Damon Ro’Teir has helped rebuild cities and fought battles. He hadn’t expected to find their witch-mate in the middle of the chaos. Now that  he has, he isn’t letting her go.  Keira’s fierce, strong, passionate, and more than a match for him and Rath.

Although the desire grows hot between them, their enemy grows stronger. Witch, dragon, and vampire, they’ll have to work together to defeat an enemy determined to claim the power Keira now holds.

Purchase your copy from any of these online retailers: 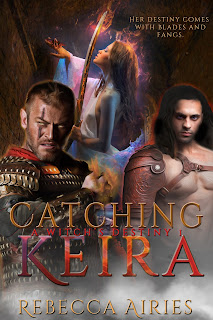 Rath’s head lowered and his lips brushed over hers. He nibbled. His teeth grazed over the curve. Prickles danced behind that light touch. He sucked. Each pull tempted and coaxed. The attraction was irresistible. Her mouth opened.
His tongue stroked, tangling, mating. A spicy warmth filled her. Her hands slid over his shoulders. She leaned into him, hungry for more of that addictive essence. His arms tightened. Hard sinew pressed against her from breast to hip. Her fingers flexed. He was all muscle.
His fingers cupped the back of her head, an undeniable claim. The kiss deepened and towed her under like the current in the Kennet. Did all dragons kiss this good?
His lips slid away, skimmed across her cheek, and down her neck. She moaned. Vellos, not yet. He inhaled deeply and a shiver rolled through his large frame.
“I can’t wait any longer for you, Keira. Let’s go to bed.” He nibbled at her neck.
His voice rumbled and rippled through her. By the Lady, that gravelly sound. Heat curled low in her stomach.
He scooped her into his arms. Her stomach lurched and her head spun. She gasped. Lady, a little warning would have helped. Her nails dug into his shoulders. She clung to him. Her heart thudded against her chest.
A few long strides carried them to the bed. He placed her on the mattress. A lump formed in her throat. If she said something now, he might back away, but the heated swirl of desire burned away any words. He knelt. Yellow-gold eyes fixed on her.
“Are you only going to look?” She licked her lips.
“No, but you’re so sexy that I can’t miss this opportunity.” His fingers trailed over her arm.
A shiver ripped up her spine. His eyes roamed downward. Hunger burned in his gaze. Those slitted orbs locked on her breasts. Her nipples hardened under the scrutiny, thrusting up as if demanding attention. A wide smile spread across his lips. Four very prominent canines peeked out.
She tensed. Her heart slammed against her chest. A cold weight settled over her. Her throat tightened and she struggled for each breath. She clenched her hands. Calm down.
Those teeth… How could she have forgotten? This wasn’t just a wizard she was playing with tonight. She’d invited a fully grown, likely very powerful, dragon into her bed. She gulped.
“It’s just a natural response to being with a beautiful woman. I can control the urge to bite.” His hands stroked over her in slow, soft sweeps.
The caresses swept down her ribs and over her hips. She slowly relaxed beneath his hands.
Rath’s head dipped. He dropped kisses on her shoulder. Heat flickered over her skin as if he left a bit of flame everywhere he touched. She shivered and smoothed her fingers over his shoulders. His mouth glided down to the small mounds of her breasts. A thrill pulsed through her and her stomach muscles tightened. Would he nip or lick and suck?
A kiss dropped into the slight valley between her breasts. He nuzzled and licked. Flaring prickles raced over her skin. Her nipples hardened and ached.
His tongue lapped and glided up the gentle slope of one breast, lashing the tight, puckered tip repeatedly. Electric tingles danced over her skin along with a slow spread of warmth. She wriggled and her leg fell outward.
He grazed the nipple with his teeth. A sharp twinge shot through her. She gasped. A low laugh rumbled against her breast.
“Such beautiful red nipples.” His hot breath fanned over the sensitive, aching crest.
A dagger of sensation shot straight to her pussy. Keira closed her eyes. The walls of her channel clenched and warm, slick moisture seeped onto her thighs. His mouth closed over the darkened nipple. Hot liquid surrounded the flesh. Sparks lanced straight to her core.
He plucked at the hard tip of the neglected breast. She arched. The simmering fever rushed over her, drawing her deeper with every touch. So good. He rolled and tugged the needy peak between calloused fingers. A sharp thrill of need speared through her. She writhed beneath his touch.
“More. I want to feel more.” She licked her lips.
He lifted his mouth. She clutched at his head, trying to urge him back. This wasn’t the time to be playing.


He eased to the side, dropping kisses and nipping her soft flesh. Prickles raced over her skin. She clenched her hands and lifted. His lips fastened onto her other nipple. He licked and lapped at the red tip. She cupped the back of his neck. Her stomach tightened and an ache throbbed through her. Oh Lady, he’d settled in to feast.


Author Bio
Rebecca Airies has always loved to read. Futuristic, the classics, mystery, horror and of course romance from sweet to extra spicy--the genre doesn’t matter as long as the stories capture her interest and take her on an adventure. She soon discovered a love for writing and characters just waiting to tell their stories. Since that time, writing has become an obsession.
Rebecca lives in Abilene, Texas. She loves the outdoors, growing things, and working on crafts when she’s not lost in the worlds of her characters.

Posted by Nicole Morgan at 6:52 AM