Magic of Books Promotions hosted its first tour during the month of November three years ago.

The company was created from the passion and desire of its owner, Tami Adams, because of her experiences as an author. From her struggles to have her books viewed and appreciated she knew there had to be another way.

Three years later Tami no longer writes but is determined to show the world the magic that lies within the pages of all books.

The following authors are helping Magic of Books to celebrate its birthday. Enjoy.

The last three years have been an incredible journey. I've made so many friends who began as bloggers, readers, and authors. I have been privileged to present and showcase new and old books from seasoned and new authors. I've learned so much I didn't even realize I should know prior to getting into this business. And after three years I can honestly say I'm still learning, I'm still growing, and I'm still making friends. I love and appreciate all of you who have supported my little slice of heaven. From the bottom of my heart, thank you.

Romance in traditional literary terms is a narration of the extraordinary exploits of heroes, often in exotic or mysterious settings. The term romance has also been used for stories of mysterious adventures, not necessarily of heroes. These adventure romances usually are set in distant places.


Please enjoy these books that focus on romance and all the sub-genres. The list is available in alphabetically order by title.

Don't forget to enter the Rafflecopter. 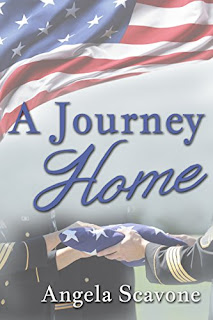 A Journey Home by Angela Scavone

Air Force Captain Stephanie Tyler's sole duty is to fly overseas to war torn areas of the world to retrieve and escort the bodies of fallen soldiers back home to the United States. It is a tough and emotional job but she is honored for the privilege. Her duty also helps her to escape her past and her failed marriage.

But those flights have become increasingly more dangerous and she is forced to have a partner accompany her. Much to Stephanie's surprise and dismay, she is partnered up with her ex-husband, Captain Douglas 'DA' Aston.

From the moment DA enters the scene, he irritates her. It could have something to do with the fact he slept with her best friend while she and DA were married. As they go on several missions together, Stephanie is forced to be courteous and professional with DA even though the very sight of him irritates her beyond comprehension.

Then, Stephanie's cheating, husband stealing, ex-best friend is killed in Afghanistan and Stephanie and DA must escort her body home. While executing this difficult duty, a myriad of conflicting emotions makes Stephanie ponder how short life really is . . . and to question her own ability to forgive. 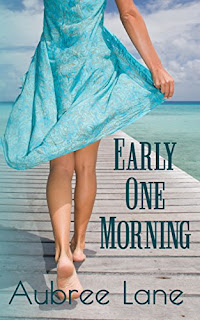 Early One Morning by Aubree Lane

Under the guise of saving her best friend’s marriage, Annie Harper catches the red-eye out of LAX to Oahu. Less than twenty-four hours after hearing Marissa wanted to kiss their old high school crush, Annie sails away with the handsome owner of the Erika Rose excursion boat. She only meant to keep Terence Javier from locking lips with Marissa, but the moment she learns his little girl needs an advocate, Annie brings her friend back into the fray and destroys the remnants of Marissa’s vacation.

Caught between two women from the mainland, Terence Javier finds himself at a crossroad. Ten years ago, he had the dubious honor of having his high school photograph drooled on by Annie and Marissa’s choir class. If not for his daughter and the ensuing custody battle, he wouldn’t have given either woman more than an appreciative glance. When Marissa’s credentials check out, he has little choice but to accept the savvy lawyer’s offer of help. Knowing he’s walking a tightrope, Terence prays he can purge the beautiful Annie from his mind and keep the balled fist of Marissa’s jealous husband away from his nose. 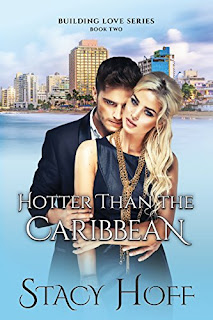 Hotter Than The Caribbean by Stacy Hoff

Luis Serrano, the unwanted love child of a hotel construction magnate, is determined to reach his father’s level of success. When Luis finds himself pitted against his half-brother for control over their ailing father's company, sibling rivalry comes to a head. The stakes are high. The brother who best completes their portion of the Caribbean construction project will gain control over the entire company. To win, Luis hires an interior design firm. But the firm will have to perform difficult work under serious time constraints.

Melanie Merritt is used to sibling rivalry. She’s always been second best to her older sister, the "golden child" of their parents' interior design firm. Melanie's desire is to be an artist. She works for her family to appease them. Her newest task is to implement a complex project for Luis Serrano under an impossibly short deadline. If she fails, her family’s company may go bankrupt. But Melanie can’t keep her too-creative ideas away from her family, and the client.

Completing work on time won't be easy. Especially when dual sibling rivalries threaten to destroy the project, and a passion hotter than the Caribbean. 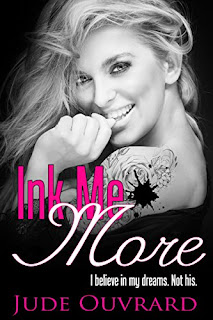 Ink me more by Jude Ouvrard

This book can be read as a standalone.

Love can be stronger than friendship, but what happens when love takes an unpredictable turn?

Valerie Lee has left Seattle, including everyone she knows and loves, to join long-time boyfriend John Maverick at the University of Boston. Fast forward a year later to graduation. Val is excited about heading back to her hometown, but John wants to stay and climb his way to the top in Boston. She doesn’t agree with the change of plans so takes matters into her own hands. When she leaves like a thief in the night, there will be a lot to explain.

The night before her big future-changing step, she meets country singer Miles Kent. Worried about her state of being for his own personal reasons, he extracts a promise from Val to keep in touch until she arrives at her destination.

Jobless and homeless, Val arrives unprepared to face her friends and family, so spends her first night in a cheap hotel. It doesn’t take long for word to spread that she’s back in town. A call to her old friend Nix, and things don’t seem quite so impossible anymore. Will her friends support her decision? Will she regret leaving John and their life in Boston? Or will her hometown, and new adventures, bring her the happiness she’s hoped for? 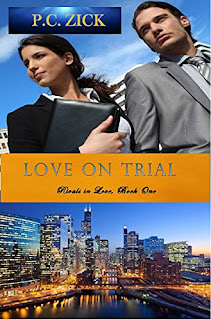 Love on Trial by P.C. Zick

Two lawyers on opposite sides of the aisle despise one another...at first.

When Jude Crandall fights for justice, she is a formidable opponent. Malik Moore may hate his job as an attorney for a prestigious Chicago law firm, but he stands up to the force of prosecutor Jude in the battle of opposites.

They disagree on most everything, except the love they both feel for their dogs, a Boston terrier and a Jack Russell terrier. When Jude's Italian mother and Malik's Iranian mother decide they are a great match, Jude and Malik are thrown together out of the courtroom. Both dogs and mothers fight to bring the two sides together.

But his Persian heritage and her father's political-aspirations throw the biggest barrier of all between them. Their dogs, Clyde and Suzanne, show them how to love. It's up to the two lawyers to overcome culture, religion, and their families to find happiness.

Love on Trial is the first book in the Rivals in Love contemporary romance series set in Chicago. The six Crandall siblings find success in their careers, but sustaining a relationship eludes all six of them.Their father, a U.S. senator, demands perfection, and their mother, heiress to a Chicago meat-packing conglomerate, only wants grandchildren to fill her empty nest. A lawyer, a pilot, an actress, a race car driver, a cable news anchor,and a chef--over-achievers all--discover there is more to life than a career. 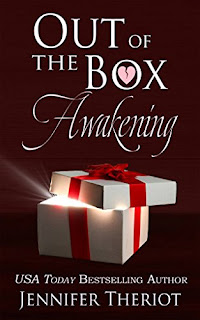 Out of the Box Awakening by Jennifer Theriot

Olivia Petersen thought her life ended the day her husband walked out. Little did she know, it had only just begun.

A good woman, mother, and wife, she's got it made. She didn't expect anything to change, but of course it does...