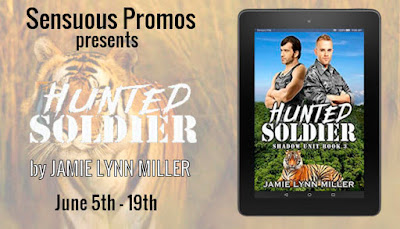 The hunters become the hunted when the past returns to haunt Sergeants Connor Finley and Shawn Weller with deadly vengeance.

In the wake of the harrowing missions in India and Pakistan, Connor struggles to come to terms with causing the accidental death of a child, while Shawn tries to put Julian’s betrayal behind him.

Adding to the emotional fallout, new trials arise - the appearance of a young man from Connor’s past turned stalker may have fatal consequences for him, while Shawn must confront his former heroin addiction and break free of the hold it still has on him.

The challenges continue when a Shadow Unit undercover op in Bangladesh to shut down the pipeline of terrorists being smuggled into the UK draws Shawn and Connor into a web of lies and deceit from a man hell bent on exacting revenge on the two soldiers - demanding a life for a life.

Will Connor and Shawn survive? Or will the jungle become their final resting place?
Don't miss Connor and Shawn's previous missions in BROKEN SOLDIER and ROGUE SOLDIER, plus the holiday short story SNOWBOUND SOLDIERS! Available now!

EXCERPT:
Shawn had been correct in his one assumption—the break in the tree line was not natural. The jungle had indeed been artificially cut back. But what he couldn't see in the semi-darkness from his perch in the tree was the eight-foot tall chain link fence that stretched for as far as Shawn and Connor could see. The area they had been dropped in, the booby-trapped expanse they'd been traversing, was no open piece of jungle. This was a private killing ground.
The escape route looked easy. Too easy. Just climb up and over the fence to freedom. Shawn and Connor approached the fence cautiously, both of them too well trained to take anything at face value, and Shawn felt the fine hairs on his arm stand up, sensing the hidden danger—an electric current running through the fence. Connor must have sensed it, too, as he shot Shawn a look.
"Knife," he said.
Shawn withdrew it from his pocket and flicked it open. He and Connor took a few steps back and Shawn tossed the knife at the fence. As soon as it made contact sparks flew from the metal, confirming their suspicions.
Shawn retrieved his knife and they immediately searched for another way over the fence. But their enemy had been clever—he had cut the trees back far enough from the fence so no one could climb out on one of the branches and jump off, clearing the top of the fence.
"Fuck!" Shawn cursed again, raking a hand back through his hair. "This asshole's thought of everything, hasn't he?"
"We don’t have a choice now. We have to make it back to the compound," Connor said.
"We'll stay close to the outside of the tree line so we don’t run across any other booby traps in the jungle," Shawn replied. "Then–"
The rest of his words abruptly cut off at the sound of gunshots ringing out, shattering the quiet. Shawn and Connor dropped into a crouch, Shawn's heart rate accelerating as adrenaline flooded through his body. They were out of time. The hunt had begun.
Without discussion, he and Connor moved as one back into the jungle, away from the direction the shots had come from, but still toward the compound. Plan A was now off the table. They couldn't be caught in the open running along the tree line. They would be picked off like ducks in a shooting gallery. The deadly jungle offered their only concealment.
Shawn knew they were moving too fast, but at this point they had to. Another volley of shots rang out and Shawn chanced picking up the pace. He instantly knew it was the wrong decision as he felt his left foot come down on the hidden pressure plate.
His combat-honed reflexes kicked in as the double row of bamboo spikes sprang up from their ground cover camouflage, heading straight for his chest. He violently twisted his body to the side, trying desperately to get out of the path of the deadly projectiles, just as Connor grabbed his arm and jerked him away.
Their combined effort saved Shawn's life, but they weren't fast enough to move him completely out of harm's way, and two of the spikes tore into and across Shawn's right side. Off balance, they both tumbled and hit the ground hard. Shawn gnashed his teeth together to keep from crying out at the intense pain and giving away their location.
Shawn clamped his hand to his injured side, feeling the warm blood coat his fingers as Connor rolled him onto his back, his partner also grimacing from the hard landing that must have further aggravated his cracked rib.
Connor pushed at Shawn's torn shirt, trying to look at Shawn's wound. "Move your hand, Shawn, let me see…"
"Oh, fuck, that hurts," Shawn ground out as Connor probed cautiously with his fingers. "How bad is it?"
Connor quickly removed his long sleeved outer shirt and tore it into strips. "They gouged pretty deep. But it doesn't look like they penetrated far enough to do internal damage."
Shawn bit down on his lip as Connor swiftly and efficiently bandaged his wounds with the strips from his shirt. "Well, I did say I'd take the next injury. You're welcome," he cracked, trying to grin through the pain.
Connor grinned back, tying off the last of the bandages. "That was big of you, mate, but what say we call it even now?"
"I'd say that sounds like a great idea," Shawn groaned, then held his bloody hand out to Connor. "Now help me up."

Jamie Lynn Miller has been writing fiction since childhood and decided to take the plunge and go pro in 2008, finding to her amazement that people truly enjoyed her love stories. She’s a romantic at heart, and her tales reflect the desire we all have to find “the one,” persevering through trials and heartache for that happy ending.
Jamie has a degree in fine arts and has spent the last twenty years working as a graphic designer, though she’d much rather be writing. She was born in Chicago and still lives there today with her husband and their two furry, four-footed children, er… cats.
If she’s not brainstorming story ideas, you can find Jamie at a sci-fi convention, in front of a furnace doing glass blowing, or on a mat twisted into a yoga pose.

6/19
All My Book Finds
http://shannaclemens.blogspot.com

a Rafflecopter giveaway
Posted by Nicole Morgan at 4:00 AM