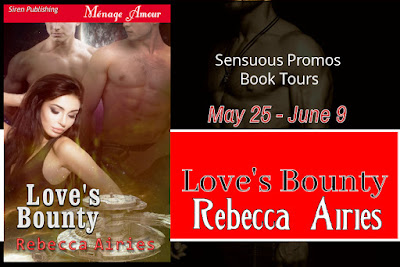 When Mitch and Dean Logan discover rival bounty hunters are after the same bounty they’re hunting, they expect trouble. But instead, they find their sister, Aileen, and Brigitte, the woman they’ve wanted for years. Now that they have the chance to be with Brigitte, they intend to discover if there’s more than attraction between them.
Brigitte wants to explore the heat between her and the two men, but they also have to catch the bounties the men are after and the woman she and Aileen are hunting. Working with the two men proves trying. She isn’t going to let a little trouble dissuade her, but she does have some doubts.
Mitch and Dean aren’t giving Brigitte up. As they search for the criminals, they try to build trust and their relationship. She belongs with them—she’s their woman, and they’ll do whatever it takes to keep her.

Kos and Rite stepped into the ship. Mitch followed them. He watched their every move. They kept their hands at their sides. Dean took them to the rec room. He pointed to the table and the two chairs around it. They had extra seating, but didn’t think they’d need it. This meeting shouldn’t take long.
“Now, tell us how you knew our location and what you’re after. Don’t expect us to believe you’re here to help. You work for another company. They wouldn’t approve.” Dean leaned against the wall and folded his arms across his chest.
“We are here to help. The company we work for has nothing to do with it. We’re hunting a bounty for them. That’s all they care about. We found someone to hunt here because Grant asked us to be here to back you up.” Kos stopped near the table but didn’t take a seat.
Mitch couldn’t be happier that his mask hid his face. His mouth hung open. How the hell did they know his father’s name?
“‘Grant’ is supposed to mean something to us?” Dean’s voice sounded calm and void of any recognition of the name.
“You know your father’s name. You are also aware he’s the man who co-owns the company you work for.” Rite shook his head. “Don’t be such a suspicious ass. We may have enjoyed giving you a little trouble in the past, but this is something else entirely. We found you because he’s worried about you. Nothing more.”
“And why would you care if he’s worried?” Mitch voiced the question that kept popping into his head. His father had never spoken of Kos and Rite. How did they know him?
“Because he’s one of the few men I respect. Give me a moment. When you see who we are, it will explain everything.” Kos reached up to the fastenings that secured his mask.
That didn’t look like it could be ripped off. If he thought it necessary to secure it against being taken off by others, Kos would key the fastenings to his DNA or biorhythms. Mitch used a similar method on his mask.
From what Kos said, they knew these people by sight. Who could it be? Mitch couldn’t think of one person who had the build and short stature to be either of those two.
The person didn’t take off the mask like he expected them to. Kos grabbed the mask and pulled out and then up. A full head mask came with it. He hadn’t realized. With the mask on, it looked like the person had blond hair, but as it came off, the disguise became apparent. He frowned. The mask hid more than he’d thought. The stocking-like bottom finally cleared the head. A braid fell out first. The long black hair stymied him, but it could be why the person wore a hood. Some people would use long hair as a means of control on them.
The hood finally pulled free, revealing pale creamy skin. His gaze traced over soft curves of a delightfully rounded face. Recognition slammed through him.
“Brigitte!” Mitch took a step forward. He hadn’t expected to see her. Hell, he hadn’t known she’d started bounty hunting.
She had the training. Everyone in both of their families trained for the business, but she’d walked away from the Astral Hunters years ago. He looked at the person standing beside Brigitte. Since Brigitte stood there, the person beside her had to be Aileen. Most of the time, those two jumped into trouble together.
“Now, you know why your father thought we’d be interested in watching your back.” Brigitte put her mask down on the table.
“Is that Aileen?” Dean asked.
“Yeah, it’s me.” Aileen removed her mask. “I knew if Dad worried, he had a reason.”
Mitch shrugged. He didn’t know what worried his father. They’d handled multiple captures before, but his father’s doubt in their abilities didn’t hold his attention at the moment. Brigitte had all of it with her mere presence.
“Yeah, seems he doesn’t think you two are working so well together lately. Plus, there are a couple of your marks he’s afraid are going to team up together. He wants you to have someone watching your back.” Brigitte caught Aileen’s mask as it sailed through the air.
He hesitated. He’d said a lot of hurtful things to her. Well, both he and Dean had. They’d been stunned and off-balance. They shouldn’t have believed her brother, Carter’s, accusation. He wished they could avoid the more awkward part, but they did need to apologize for giving her such a bad time.
“You said you had a bounty to hunt and you wouldn’t be stealing from us. Who are you after?” Mitch asked. Nothing like avoiding the issue, but he didn’t want to see the smile wiped away from Brigitte’s curved lips.
“Our mark isn’t your style. You go for the violent criminals. We knew the white-collar criminal we’re after wouldn’t be on your list. Part of why we picked her.” Brigitte shrugged.
“And the other part?” Dean asked.
“The fucking huge bounty.” Aileen grinned. “If we can get her, we’ll have a nice chunk to play with even after the company gets its piece.”

Rebecca Airies writes paranormal, fantasy and sci-fi/futuristic romance. She loves reading, writing, crafting, a good cup of tea, chocolate and snuggly kitties. She's been writing stories since she was in her teens, at first trying to get over that elusive hump and finish a story. You can usually find her working on multiple WIP at a time and she likes nothing more than losing herself in those worlds and characters.

You can find me online at www.rebeccaairies.net