The Baby Maker by Margaret Tanner - Get your #Romance today! #HEA #LoveStories 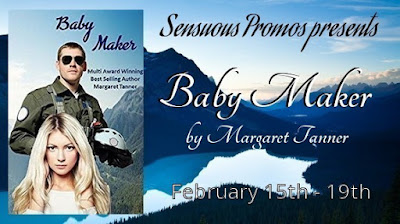 His name and his money are the only things war hero, Tye Jamieson, can offer Jenny McKenzie and their unborn child.
Tye is an expert at making babies, but not of the human variety. His babies are sophisticated fighter planes. Now that he has made a real baby, he is desperate to protect it if his secret mission into war-torn Iraq goes bad.
When tragedy strikes, will Jenny be able to forgive him for the way he has deceived her?

Jenny McKenzie stepped into the ward hiding her anxiety behind a forced smile.
“How are you feeling now?” She bent over to kiss her grandfather who was propped up against two pillows. Her forehead brushed against his snow-white hair.
“Not too bad. Don’t look at me like that, Jenny Wren.  There’s still a bit of life left in the old dog yet.” He chuckled. “It was just a heart flutter.  I told that young whippersnapper of a doctor I’d be all right at home.”
“I thought… Well, when I got the call at work…” She blinked back tears of relief.
“If the manager hadn’t got into a panic when I fell over at the shopping center and called an ambulance, I wouldn’t even be here. Now they want to do tests, and I’ll probably be stuck here for weeks,” he grumbled.  “You know what these medical people are like. Once they get you in their clutches they turn you into a guinea pig.”
Jenny sat on the bed and picked up one of his gnarled hands, cradling it between her own. Fingers, calloused and wrinkled with age, entwined with her white youthful ones.
“What do you think of my granddaughter, Tye? She’s quite a girl, eh?”  Smiling proudly, Angus McKenzie waved his hand toward the other occupant in the ward. “Fancy me sharing a room with a celebrity.”
Jenny turned her head and received the shock of her life.  Tyler Jamieson, famous American test pilot and Gulf war hero lounged on the other bed.
“H…Hello, Tye.”
“Hi, Jenny.” He flashed a devastating smile that caused her heart to flutter. His deep, well modulated voice held the slightest American accent.  His eyes, deep amethyst in color, flicked over her then returned to reading his book, as if he wasn’t impressed with what he saw. And why would he be? Compared to the international models and starlets he favored, Jenny McKenzie was a nonentity.
It had been headline news. A devastating accident that had fractured his leg and pelvis eighteen months ago, had put him in hospital for weeks. She had devoured every word of it.  Minutely studied his picture, fell in love with it, and him.  Instead of ejecting from his fighter jet when one of the engines caught fire, he flew it away from the populated areas, crash landing on a country road.  There was talk for a time that he might end up a paraplegic. Why was he back in hospital?
The well-shaped, sensuous lips suddenly drew into a thin harsh line, emphasizing the deep grooves running along either side of his mouth. He was angry and she didn’t know why.  Had he noticed the electrifying effect he had on her? Could he guess that he was the type of man she had been hoping to meet for most of her life?


Margaret Tanner is an award winning, multi-published Australian author, who writes Contemporary Romance, Historical Romance and Western Romance. She loves delving into the pages of history as she carries out research for her historical romance novels. No book is too old or tattered for her to trawl through, no museum too dusty. Many of her novels have been inspired by true events, with one being written around the hardships and triumphs of her pioneering ancestors in frontier Australia. She once spent a couple of hours in an old goal cell so she could feel the chilling cold and fear.
Her favorite historical period is the 1st World War, and she has visited the battlefields in France and Belgium, a truly poignant experience.
With the encouragement of friend and Western Romance author, Susan Horsnell, she has fallen in love with writing Western Historical Romance.  Frontier Australia and frontier America, have many similarities, isolated communities, a large single male population and a lack of eligible women.
Margaret has a short story published in the Western Romance Anthology, Rawhide ‘N Roses which was a 2015 Rone Finalist.
Margaret was also thrilled and excited to be invited to contribute a novella in the ground breaking series American Mail Order Brides. 50 brides from 50 different States in America, from 45 different authors. Her contribution is Edwina – Bride of Connecticut, Book No. 5 in the series.
Margaret is married and has three grown up sons, and a gorgeous little granddaughter.
Outside of her family and friends, writing is her passion.

2/18
All My Book Finds
http://shannaclemens.blogspot.com