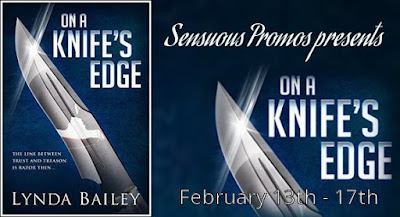 On a Knife's Edge
She was once his sweet salvation…
Lynch Callan has been a dead man walking most of his life—nothing out of the ordinary for a member of the 5th Street biker gang. There was a brief period, though, when she made him believe he could be more. That he could be worthy of her, and her love. To protect her, and keep their relationship from being discovered, he went to prison. Except now the Streeters are in danger. But in order to save his crew, he must first betray them. If caught, he’ll end up dead for sure. It’ll be the mother of all balancing acts—especially with her in the picture. But Lynch will do whatever is necessary to protect the people he loves.
He was once her deepest desire… Shasta Albright doesn’t break the rules. Not anymore. As an unruly teenager, she defied her family at every turn…even secretly befriending, then dating, then falling in love with a bad boy Streeter. Finally her recklessness caught up with her—with lasting and even dire consequences. Now she leads a pristine existence, always staying within the lines and keeping her secrets hidden. That is until he gets released from prison. Can Shasta hold her perfect world together, or will everything get hurled into chaos?
With young girls going missing, the sleepy town of Stardust, Nevada becomes an unlikely epicenter for an illicit slave trade—with Shasta and Lynch caught in the middle. Amidst the rising body count, they fight to keep their loved ones—and each other—safe. A single slipup could have deadly repercussions. It’s an untenable and treacherous position. Much like walking On a Knife’s Edge…
PURCHASE FROM AMAZON TODAY
Excerpt #2 – adult only…
Lynch broke the kiss and grasped the pull tab of the sweatshirt zipper. With purposefully slowness, he lowered it. He bore his gaze into hers, giving Shasta the chance to stop him. She just stared at him with eyes so huge, so round, he thought he’d die within their brown depths.
Once the jacket hung open, he flicked it off her shoulders then skimmed the t-shirt up her torso. She lifted her arms and he pulled the shirt over her head.
He snagged her wrists. “Keep ‘em up, kay?”
Her delicate throat muscles labored as she nodded.
He ghosted his palms over her sports bra then wormed his fingers under the bottom. Still holding her gaze, he tugged it up. She licked her lips and her arms quivered slightly, but didn’t lower. Within seconds, her breasts were bared. He devoured them with his gaze.
They were flawless. The perfect size with two perfectly pearled nipples.
He outlined one areola with his finger. Her body trembled. He shifted her position so she laid prone on the seat, her feet near the handlebars and her head resting on the passenger cushion.
He kissed her again. His balls ached and his cock pounded at twice his heart rate. His hand molded around one breast. The satiny feel sent another shaft of hunger through his blood.
He kissed her eyes closed before nipping his way to her ticklish earlobe. Goose bumps erupted across her skin and her body arched toward him. His mouth journeyed down her delectable flesh to lick the velvet hollow of her neck, then down farther to a rigid nipple. Her body went completely still—almost like she’d stopped breathing—as his lips closed over the puckered crest.
Lynch stroked his tongue over the peak while his hand skimmed across her flat belly to the snug waistband of her jogging shorts.
Shasta braced her heels on the handlebars and elevated her hips. Lynch pulled while she wiggled. At last, he peeled the offending garment off one leg then the other, along with her running shoes. He replaced her socked feet to the outside edge of the handgrips.
Air back up in his chest as he feasted on her spread before him in all her naked glory. Her skin held a slight rosy hue and her earthy, sexy scent filled his senses. Her nest of pussy hair tightened the knot in his belly. He never dreamed he’d see her like this again.
He again gently gripped her wrists and placed her hands on the passenger seat. “You best hold on, Shaly,” he croaked.
About Lynda…

I have no doubt I was born a storyteller.

I remember telling my first “story” in kindergarten. I informed my teacher, Mrs. Downing, that my mom had just had a baby boy. She hadn’t, of course, and while I got thoroughly admonished for my “storytelling,” I wasn’t deterred from what would become a lifelong passion.

From making up tales as a kid which centered around my favorite TV shows to today, I love telling stories! Stories with handsome guys and spunky gals, that always…always end with a happily-ever-after.

My romances are full of passion, with heat levels that range from hot to sizzling! I've been a finalist in numerous writing contests, including RWA’s® prestigious Golden Heart® in 2010. Please join me for laughter, love and that all important HEA.