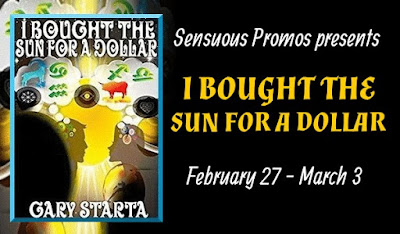 Can anyone actually buy peace or happiness? Perplexed by the loss of job and fiancé, Timothy Ray makes a symbolic purchase of the sun for a dollar to try to right things in his slightly off course career trajectory. When he stumbles upon a brilliant, cascading sunrise and then a chance meeting with a statuesque blonde he feels his life is about to change for the better but his new girlfriend is a spy, working for a contracted data mining firm.


Timothy stared into the glass cookie jar that held the dollar he had used, as deed and payment for his glorious life changer. It was symbolic just as the sun was. It didn’t matter if his ownership was real or not because it was changing his perspective. That was real and it had brought some riches into his life: a playful cat yet to be named and his first date with Lou Ann, who sounded just amazing from the hour long phone conversation he had with her last night. A date had been set for tonight. The hope of turning his life around lifted his spirits enough to return to work to complete his last week before termination.

Kate aka Lou Ann sipped her drink with care. She was on the job, not on a date, although it probably appeared that way to the patrons of the Restaurant Nora, America’s first certified organic restaurant.
“What’s the matter?” Timothy asked, appearing flustered. “You don’t like your drink. I can request them to fix it for you.”
“Oh, no, it’s fine. I just don’t want to get too buzzed. Tomorrow is a work day.” Lou Ann played the part of a transplanted Kentuckian, replete with accent. She wasn’t worried about getting tipsy off the Burgundy wine. She was concerned about not responding when Timothy called her by name. It was the first time in her life Kate faked her ID, unless you included her performance in a fifth grade play. Her teacher had reprimanded her for playing the character too aggressively. Kate smiled on the inside because she thought her character was too wimpy and stereotypical. These thoughts soon led Kate to dream of being a police woman. Now, here she was; playing a detective of sorts, attempting to glean information from the supposed bad guy. Although Lou Ann, enamoured with Timothy’s good looks and humour, was failing to see how the companion seated across from her was ‘bad’. She found it humorous that Timothy believed someone could actually ‘fix’ a glass of wine. She laughed playfully and repositioned herself on her seat to lean closer to Timothy.
“You seem to have something to tell me. Those big brown eyes are boring right through me. And I’m just dying to know.” She drummed fingers on the table.
“I have to admit I love your accent. What made you move?”
“The move was all about job relocation. Were you hoping it was about something else, something romantic, perhaps?”
Timothy gushed. “I don’t know. You got me. I like your looks as much as your voice. I think I told you that on the phone last night.” He played with his napkin.
“You did. Three times in fact, but who’s counting?”
“I’m enjoying my date with you but I feel like a kid who’s waiting to open presents at Christmas. I haven’t felt like this since, well, since I was a kid.” Timothy nodded as in agreement with his own conclusion. Lou Ann hesitated to reply hoping the man might reveal something her employer would be interested in.
“I had a life changing experience in the woods a few days ago. I want to take you there. I want to show you my new path, so to speak.”
“My God, I’m not sure. This is only our first date.” Lou Ann winked and sipped at her wine.
“It’s nothing like what you might be thinking.” Timothy raised a hand. “It’s not about trying to have sex, Lou Ann. It’s so much more.”
“Well, I don’t know. Should I bring a can of mace?” She nodded and then smirked. “I mean I usually don’t go into the woods with strangers on the first date.”
“It wouldn’t be tonight. In fact, it has to be tomorrow, at dawn. I suggest we each catch some sleep and meet at my house at about 5. Don’t worry. You’ll be safe. The only creature out in those woods used to be a cat, but now she’s living with me, indoors.”
“Oh, so you like to bring your women indoors as well, how interesting.”
Timothy gushed. “I know you’re teasing me with that Southern charm. And truth be told, I don’t mind it.”
They both laughed. Timothy called for the check.


“I enjoyed the meal and company, Timothy. I guess I’ll be seeing you bright and early. But I can’t stay too long. This gal plays a very important role at her work and her superiors are very demanding.” After she said it, Kate reprimanded Lou Ann for being so revealing. This was a reconnaissance mission. It wasn’t about trying to build self-esteem. Although, Lou Ann/ Kate imagined that whatever Timothy saw in the woods was certainly a confidence booster and that notion did seem to have an addictive quality to it.

Gary Starta began writing as a journalist where he covered the police beat, town meetings and interviewed local artists. His inspiration to tell stories did not stop with newspaper reporting when he began writing fiction in 2004 at the very strong suggestion of a girlfriend. Now, with 17 books written, he foresees many more stories on the horizon whether they be contemporary, romance, thrillers, sci fi/fantasy or murder/crime.

3/1
All My Book Finds
http://shannaclemens.blogspot.com

Posted by Nicole Morgan at 8:11 AM