Roping the Cowboy #BoxedSet by the Authors of @RomanceBooks4Us #Cowboy #Romance 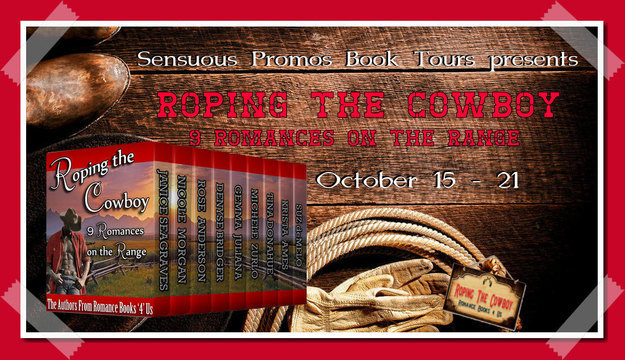 Max struggles daily to hide his psychic gift with animals. Being a hired hand at a local dairy probably wasn't his best idea, but his mom needs the money he brings in. And there's the dairy owner's sexy daughter he can't stop thinking about. Will he ever have anything other than himself to offer her?

Terry Reynolds runs his family’s cattle ranch in Antonito, Colorado. Born and raised on the
one-hundred-plus acre property, it’s the only life he knows. Much to his match-making
mother’s dismay, it’s the only thing in his life he truly cares for.

Andie Donahue has just moved to Antonito after inheriting a small two-bedroom cabin from
her late aunt. She wants a new start and decides this is her chance. After discovering a
dating site has matched her to a handsome cowboy in the same town, she wastes no time
sending the hunk a message.

Terry has no clue why some strange woman has shown up at his ranch, or what the heck
she’s talking about. After running the adorable brunette off, he finds out the truth. Now he’s
faced with making amends for his mother’s meddling. But did he just blow the best chance
he had for love right out of the water? And worse…what does he do now?

In 1919, with soldiers off to war in Europe and influenza taking the heartiest in the homeland,
a small ranch in New Mexico hangs on the edge of foreclosure. After the granddaughter of a
Yaqui medicine man prays to the ancestors for guidance, a stranger arrives seeking work
and he's is unlike any vaquero they've ever known. Be not forgetful to entertain strangers:
for thereby some have entertained angels unawares.

THE SHADOWS IN OUR PAST by Denyse Bridger
Genre: Historical Western
Chili Peppers Rating: 3

Enroute home to Gold Ridge, Colorado after their honeymoon, David and Hannah Logan are
attacked by a pair of bandits who plunge them back into a past they shared, but never truly
came to terms with together... It’s been almost a year since the nightmare of violence and
assault tore Hannah from David’s side and left him bereft and angry. When she returned to
him, determined to rebuild what they’d lost, the light of love had come with her. Now, a new
torment threatens to destroy everything, and Hannah’s biggest enemy might just be David
himself…

Amy Waterstone must return to the family ranch in Glen Creek, Texas because her father had
a serious accident. Then she learns her father compromised the ranch by taking a loan he
can’t repay from Chase Storm, the cowboy next door. He’s the one man she never wants to
see again. Chase has waited seven years for Amy to come home, and for a chance to
redeem himself in her eyes. They’re both older, but are they any wiser?

Tasked with scattering the ashes of her beloved aunt at the source of the Big Bear River
high in the mountains, Mallory must swallow her pride and ask Gavin, a laconic, sexy ranch
hand, to guide her.

This luscious cowboy's been on her radar for years, but he's never noticed her. A speeding
ticket changes everything, leading to a sultry weekend and no-holds-barred romance -
Texas style.

Dr. Miranda Chase didn't want to be home but she'd do just about anything for her dad
including temporarily taking over his veterinarian practice. However, once she met her dad's
client Garrett, she wanted to drop everything and run. Cocky cowboys just weren't her thing.

Garrett Jackson cares more about his horse than himself or anyone else and when a tiny bit
of a thing calling herself a vet blows into his life like a tornado, he's literally knocked for a
loop. He doesn't have time for women.

But, when Garrett's horse turns up missing, Miranda isn't going anywhere. Forced to work
together, they'll learn a little bit about each other or die trying.

(England, 1870) The Honorable Amelia Haddon must marry, or lose the income that supports
her and her "companion."  Averse to men, she is desperate until an American cowboy
proves to be her unlikely rescuer. But will judgmental society drag this happy trio apart? 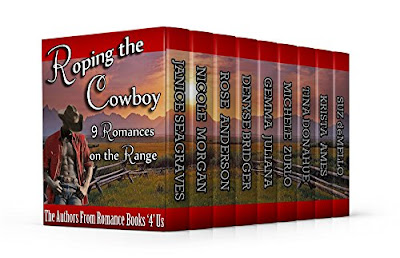 Find out more about the authors of Romance Books 4 Us by visiting them here:
http://www.romancebooks4us.com