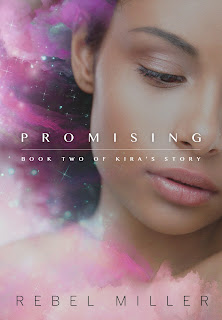 PROMISING, the riveting follow-up to AWAKENING by Rebel Miller.

Faced with diverging loyalties — between those she loves and her responsibility to the Realm — Kira has to make heartrending and strategic decisions that threaten to jeopardize her future.
As her connection to Tai deepens and turmoil in the Realm builds, so does Gannon’s frustration at being unable to call Kira his own.

Worlds at War ... A Heart in Conflict

While the Realm stands defiant amidst rising unrest, Kira is thrust into a role that puts her at the forefront of her system’s governance and law, supporting a landmark position. Following a devastating turn of events, she turns to Tai for a shoulder to lean on after making a painful choice to ensure Gannon fulfils the role he was meant for.

As she becomes a reluctant - yet inspiring - voice for her caste, Kira learns about one of the Realm’s most well-kept secrets and how far leadership will go to prevent it from being revealed. What she doesn’t know is how much the decisions of her past have the power to bring enemies into her path, threatening to destroy everyone she holds close to her heart.

This novel is for mature audiences (18+) and includes committed relationships with multiple partners.

Enter to win an eBook version of Promising: Book Two of Kira’s Story, a Rebel Miller Books tote and magnet, and a signed poster.

“How is it that with all our system’s technology I can’t make love to you from thousands of light years away?”
I snorted, but my lips tilted up at the corners nevertheless. “I’m sure the Protectorate has some sort of virtual reality device that could be refashioned just for that purpose,” I offered, rearranging the wool blanket on my lap.
I was curled up in bed, facing my monitor and resting against a pile of pillows. It had become a familiar position over the last few weeks, one from which I would relay the day’s activities during my nightly call with Gannon. Well, it was a nightly call for me. The sun had already risen where Gannon lived, on Dignitas One.
Suddenly, Gannon seemed to be deep in concentration. “No, on second thought, there’s no technology that could ever measure up to the real thing.” He grinned.
I smiled, heat rising to my cheeks.
“There’s the smile I was looking for,” Gannon said, leaning closer to his monitor, and so closer to me.
He was sitting in his office. He had been holding our calls from there more frequently over the last month. From what I could see, his office was a large, well-lit space. A wall of floor-to-ceiling glass ran its expanse directly behind him. Through it, I could see citizens of every caste striding by in obvious haste to get things done, more than likely at Gannon’s bidding. During these nighttime conversations with Gannon, and within the intimate surroundings of my bedroom, it was easy to forget who he was and his status. As chancellor, he surely had, every day, a checklist as long as my arm, filled with tasks.
I frowned as I noted the time. “I should let you go,” I said, sitting up.
“Why?”
I glanced pointedly behind him, fiddling with the thin strap of my top. “Your office looks incredibly busy.”
He blinked then swiveled in his chair to look at the steady stream of people behind him.
“Oh, my support always look like that,” he said, mischief glittering in his clear blue eyes as he turned back to me. “They think it’ll prevent me asking them to do anything else.” He winked, and I laughed, loving his cheekiness.
If his office was anything like the Judiciary on Prospect Eight, where I worked, there would have been, since Septima, a heightened state of activity and an added fervor underscoring every project. The Corona had wasted no time gaining approval from Realm Council to initiate an investigation that would seek out who was responsible for the attack. In her own words, it was an act of war against law-abiding citizens that would not go without justice.
A shiver rippled through me as I recalled her remark.
“Gannon,” I said so sharply that he became somber at once, “promise me you won’t monitor my family anymore.”
He narrowed his eyes. “Why would I do that?”
I swallowed. “Uncle Paol made his decision, but my cousin, she’s safe with my parents,” I said. “He’ll need to answer for his own choices.”
“I would rather be aware of what your uncle’s up to,” he said. “If he’s still aligned with the factions, then, depending on what he does, you or your family could be in danger.”
I was shaking my head before he finished speaking. “It would be best for Adria and my family if we just let things lie,” I said.
Gannon scowled. “That’s not something I normally do, Kira,” he said. “Things have a way of coming back up to haunt people.”
I leaned toward him, clenching my fists. “Please.”
Gannon must have seen something in my expression because he nodded, though with a great amount of obvious reluctance.
He ran a hand through his hair, disheveling the blond locks, as he lowered his gaze to his desk. “How’d it go today?” he asked.
I thought for a moment then ended up with “Good.” It was odd to describe a farewell as such, but there was truly no other way to describe it. I sighed. “A lot of people came by.”
He glanced up from under his lashes. “Was Tai there?”
I hesitated then nodded.
Gannon lowered his gaze again, this time to his hands, which were now clasped tightly in front of him on his clear glass desktop. “And how is the newly appointed commander of Prospect Council?” he asked, still looking at some point around his wrists.
I blinked. “He … seems fine.”
Gannon nodded, still not looking at me.
I studied the crown of his head with a frown. “When will you be back on Prospect?” I asked, hoping to change his mood.
Finally he glanced up, with apology clear in his eyes. “I was hoping to be there in the next few days,” he said, cringing, “but my father just asked me to lead discussions on Hale Three. Since their minister’s murder on Septima ¾”
My pulse spiked. “Where on Hale Three?”
Gannon drew back, frowning, no doubt at my sharp tone. “A town called Tork.”
I shot up to my knees, gripping the blanket on my lap. “Don’t go.”
Worry flickered across his face. “Kira, what’s wrong?”
I licked my lips. “The factions,” I said. “They’re using Tork as a command center. You could get hurt.” Or worse. Oh gods.
Gannon’s shoulders dipped as he frowned. “Lahra,” he began, and I melted a little at the endearment. “There’s violence everywhere. I’ll be well protected.”
That wasn’t enough. “Can’t someone else go instead?”
He shook his head, regret clouding his eyes. “It’s not that sim¾”
“Please,” I said, holding back a swell of fear. “I can’t have what happened to my aunt happen to you.” 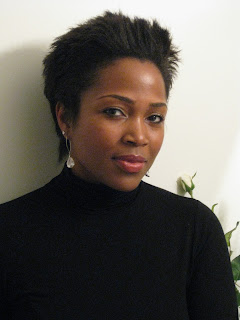 Rebel Miller is an author who overindulges in Pinot Grigio, caramel popcorn and an eclectic mix of movies, music and angst-filled romance novels.

Rebel lives in the outskirts of Toronto, Canada with her husband and two sons.

Posted by Nicole Morgan at 5:24 AM