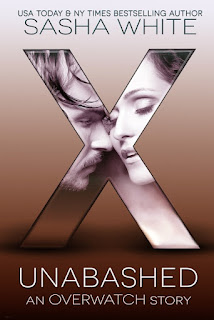 The follow up to the bestselling novella UNFETTERED is here.

She’s finally found a man who sees her for the woman she is, and she’s not holding back.
Mechanic Veronica “Ronnie” Mack joined the Overwatch club because she’d given up on finding love, and decided to settle for sexual satisfaction. Then Ian, her childhood crush, walked back into her life as one of the club’s Trainers, and proved that their connection was as strong as ever.

Computer guru Ian Johnson’s work kept him busy, with little time for a social life, which is just the way he liked it. Then Ronnie Mack strode into the club, and straight back into his heart. He couldn’t deny the need to make her his own, and now he’s learning that training a sub he’s in love with is a whole new adventure. 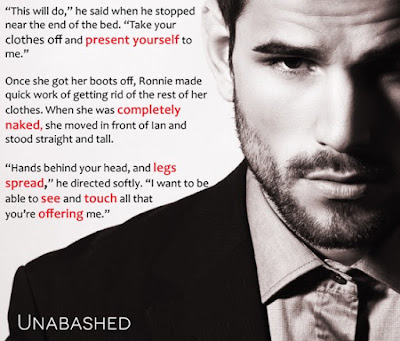 When they got to her place, she wasn’t sure exactly what would happen. She’d expected them to do a scene at the club right after their negotiations, but instead Ian had pointed her toward the door and they’d left. She was about to ask why they were leaving when she remembered she’d given him all control whenever they were together, and bit her tongue. It was going to take some getting used to, but not knowing what was going to happen gave her a little thrill.
Okay, a big thrill.
She’d also enjoyed the way he’d guided her to his car, and opened the door for her, handing her into the seat and making sure she buckled up before he closed it. It should’ve felt overbearing, or like he was treating her like a child, but it didn’t. Instead, it made her all warm and soft inside.
Now, as they entered her apartment, she stopped, standing still in the middle of her living room, anticipation making her belly quiver. Ian closed the door, and, after a quick look around the small space, he said simply, “Show me your bedroom.”
She led him down the short hall, the heat of his gaze on the back of her legs making her add a little extra swing to her hips as she went.
“This will do,” he said when he stopped near the end of her double bed. “Take your clothes off and present yourself for me.”
Once she got her boots off, Ronnie made quick work of getting rid of the rest of her clothes. When she was completely naked, she moved in front of Ian and stood straight and tall.
“Hands behind your head, and legs spread,” he directed softly. “I want to be able to see and touch all that you’re offering me.”
As he moved forward, walking slowly around her body, telling her how every Dom had their own preferences as far as protocols went, something new happened. Her mind slowed, and she stopped thinking about what would come next or if he liked her small breasts, and she let herself sink into the energy he was putting out there.
“You’re going to start learning my preferences now, and I’m going to learn a few of your body’s secrets. When I ask you to come to me, standing straight like that is fine. But when I say present yourself, I want you open so I can do this.” He stroked fingertips down her side, and she sucked in a breath, goose bumps rising on her skin instantly. “Ticklish?”
“A little.”
His hand moved down across her stomach and between her legs. “Or this,” he said as his fingers brushed lightly over the curls covering her sex.
A shiver ripped through her, and he smiled. “You’re very responsive.”
“Thank you, Sir.”
His smile grew, and her insides heated some more. “Let’s see what else you like, shall we?”
He ran his hands over her body, stroking her here, kissing her there, pinching her everywhere, sometimes soft, sometimes hard. It didn’t take him long to discover that she enjoyed having her breasts slapped, but not her ass.
“Ouch!” she’d cried out, dropping her arms and swinging around to stare at him the first time he’d smacked her hard. When she realized what she’d done, she lifted her shoulders and smiled pretty, trying to be cute. “Oops?”
His lips twitched. She saw! Then he took her wrists and placed them back on her head, bent her forward at the waist, and smacked her ass three times hard and fast until it burned. She bit her lip and moaned but didn’t move again. She liked the other touches way better.
Ian smoothed his hand over her fiery cheeks then under to finger her dripping pussy. “Seems your body likes a little bit of pain, doesn’t it, my girl? Or is it the punishment factor you like?”
When she didn’t answer right away, he pulled his fingers out and smacked her again.
“I don’t know!” she said quickly. “I like some roughness, but I’ve never really been a fan of pain. Which is how that feels.”
“And this? How does this feel?” he asked, pinching her right nipple between thumb and forefinger slowly. She moaned, arching her back but trying to not to lean toward him. “Good.”
“Only good?” He let go of her wrists and got a hold of her other nipple.
“Amazing, Sir.”
“Tell me.”
Ronnie struggled to form words to describe what she was feeling. “It’s like my nipples are the posts on a battery and you’re jump-starting my engine. Everything in me is focused right there, and when you squeeze, it all shoots to my–” He squeezed her nipples a little harder, and she went up on her tiptoes, words tumbling from her lips. “To my pussy! To my cunt! Lightning bolts from nipple to cunt.”
Fire lit his eyes up, and he leaned down, slamming his mouth over top of hers. All of a sudden, the gentle teacher was gone, and a master was kissing her. His tongue thrust between her parted lips, taking, tasting, owning her as he sucked away all of her breath. Her knees melted along with her insides, and she let all of her weight go as his arms wrapped around her.
She whimpered, wanting to writhe against him as the pressure built between her thighs. His erection pressed against her belly, but she wanted to feel it lower. She wanted to feel it hot and hard and naked, probing at her entrance.
He pulled back, chuckling evilly as he began to unbutton his shirt. “Hands on the bed, ass to me.”


“Yes, Sir!” she snapped out sassily, moving with an eagerness that should’ve been embarrassing, but wasn’t.