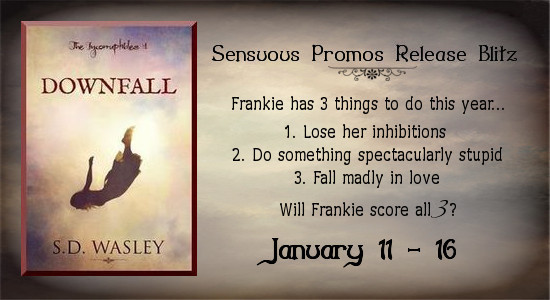 Frankie’s cousin wants her to do three things this year:

1. Lose her inhibitions
2. Do something spectacularly stupid
3. Fall madly in love

Travelling was Frankie’s life. As the daughter of a big-name evangelist, she’s been able to feed her hunger for new sights throughout most of her teenage years. Then a hushed-up scandal gets her thrown off the tour circuit and stuck at her uncle’s house in the town of Augur’s Well.

Forced to repeat her failed senior year, it looks like a dismal existence for Frankie—until she’s invited to the bizarre meeting place of four mismatched people ... and falls hard for the fascinating, secretive Cain Aleister.

Furtive meetings in an underground chamber ... Latin words carved into a stone wall ... intense desire ... and a secret so elusive she’ll do almost anything to bust it open. Until now, Frankie never believed in grand passions—but that’s not the only one of her beliefs about to implode right before her eyes.

Looks like Frankie’s going to score three for three.

I had to touch him on his bike, to press my arms and thighs around him so I wouldn’t fall off. He was solid. I don’t know what I’d expected but, for some reason, that surprised me. I felt fear as well as something else I didn’t understand, something that made me tremble all over. I told myself it was just the exhilaration of speeding along the highway with the cooling wind rushing past my arms. He didn’t ride towards civilisation but took us even further beyond Gaunt House ruins. I had no idea how long we were out there but it must have been a long ride because the light started to change. I wondered if Cain could feel how hard my heart was thumping with it pressed against his back like that. When we finally arrived back the others’ cars were at the ruin. He cut the engine as we coasted to a halt. I let my arms fall reluctantly but stayed where I was.
“Where did you go, when you went out the other night?”
I felt Cain go tense and it took him a moment to answer. “What do you mean?”
“And last week. Where did you go? What’s the big secret?” I twisted around him, trying to see his face.
When he glanced down at me I knew for certain I was right. There was a secret. I nudged his back with my shoulder.
“I don’t know what …” he said, his tone mechanical.
My frustration surged. “I’m not going to let it go. You’ve invited me back here so what’s the secret? I bet the other three know. Tell me!” He didn’t answer. “We can do this the easy way or the hard way.” I shocked myself with this tough guy attitude. “Are you choosing the hard way?”
Cain was startled, too. “What are you going to do?”
I just slipped off the seat, leaving him to put the bike on its stand and follow me into the ruin.
“Francesca!”
I heard from his hurried footsteps that he wanted to talk to me before we went inside but I didn’t trust myself not to betray what I was feeling; this big … huge … massive desire, just barely disguised by frustration. I knew the other three were inside. It would be safe in there. We wouldn’t be able to have this conversation anymore. I just needed to make it inside before he caught up to me. After a swift clamber down the ladder I rushed blindly for the door but somehow Cain caught my hand to stop me an instant before I threw the door open.
“Francesca.” He breathed my name warm against my neck.
A hot, uncomfortable flush hit me when Liz, Owen, and Jude saw my hand caught in Cain’s, although he made an attempt to pull his away. Too late. They’d seen our breathless awkwardness, dishevelled hair, and tangled fingers.

S.D. Wasley was born and raised in Perth, Western Australia. She has been composing literary works since before she could write – at five years of age she announced her first poem in the kitchen, improv-style. About 20 years later she earned a PhD in communications. She writes in a range of genres including young adult, paranormal, mystery, new adult romance, and literary short stories.

Her debut novel was published in early 2015 through Evernight Teen, and her first adult paranormal romance will be released on January 7, 2016. Today, she lives and writes in a wine region with her partner and two daughters, surrounded by dogs, cats and chickens.