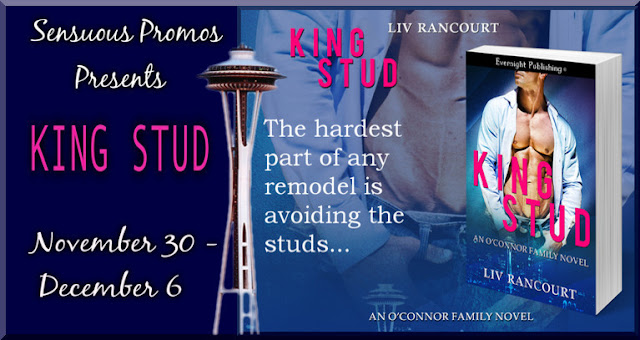 Danielle’s got three months to make her Grandmother’s rundown Craftsman house livable. Her game plan is to get in, get grubby, and get back home to L.A. She needs a carpenter, and her best friend’s younger brother is a good one. It’s hard to ignore the buffed body under Ryan’s paint-splattered sweatshirts, but her friend declares he’s off-limits so Danielle reluctantly agrees.

Ryan doesn’t have the cleanest record, anyway. His recently ex-ed girlfriend wants him back, and he has a reputation for brawling. He’s also had a crush on Danielle since he was a kid. Despite their nine-year age difference, he knows she’s worth pursuing.

Soon the paint under Danielle’s fingernails starts feeling more natural than the L.A. sunshine. She’ll have to navigate plumbing disasters, money problems, and one seriously cranky best friend to find something she hasn’t had before: a real home, and a man who loves her.

Faced with the drafty interior of a big box store on a Sunday evening, Danielle did what any other single woman would do. She whipped out her cell phone, scrolled through her contacts, and sent up a prayer to whichever god was listening. She’d been back in Seattle exactly three days, just long enough to have figured out things at her grandmother’s house were a lot worse than she’d anticipated.

I write romance: m/f, m/m, and v/h, where the h is for human and the v is for vampire … or sometimes demon … I lean more towards funny than angst. When I’m not writing I take care of tiny premature babies or teenagers, depending on whether I’m at home or at work. My husband is a soul of patience, my dog’s cuteness is legendary, and we share the homestead with three ferrets. Who steal things. Because they’re brats.

Please visit all the stops on this tour so you don't miss a single peek into this book or what the author has to say!

Posted by Nicole Morgan at 1:30 AM