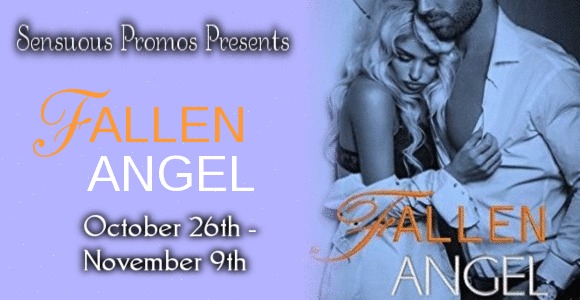 Welcome to the Book Tour for Alisa Anderson's Fallen Angel: A Mafia Romance - Part 1: A Roman Crime Family Novel. This novel is a dark and tasty tale which may remind you of the Sopranos, only so much better. Already climbing the suspense and anthology charts on Amazon, it is sure to skyrocket to a best seller in no time. Oh and did we mention that there are five other books in this series? Mark our words readers these characters will take you on one hell of a ride. So prepare yourselves, because things are about to get dicey!

Fire Meet Gasoline...  When Jess packed up her belongings and fled her small hometown in Kansas, she never looked back. Free from her family’s dark past she was finally able to pursue her lifelong dream as a professional dancer. She never expected to find herself at his door...or at his club.  Nick was unlike any other man she had ever met. Sexy…Alluring…Predatory. Dangerous. The kind of man with more secrets than even she had. Every instinct warned Jess against knowing him further, but she always did like playing with fire…  Nick Roman took one look at Jess and knew she was trouble from the very start. But something about the defiant twist of her mouth and the wide, haunted eyes of a damaged soul touched him in places he had long ago thought dead. He knew he needed to stay far away from her for his own sanity, but like a moth to a flame he was helpless to resist…  Working at Takers Gentleman's Club was the last place Jess thought she would find herself, but she quickly learned how the game was played.  See what you want, take what you can get…but at what cost?  ***Fallen Angel is a mafia romance serial novel released every 6 to 8 weeks, at approximately 12000 to 15000 words each. Due to sexual content, implied and actual scenes of abuse, violence, organized crime, language and frequent illegal drug use, we recommend this to mature audiences, ages 18 and over, who are comfortable with this subject matter.***

The poetry of Fallen Angel by Cameron Skye.
I’ve been asked what poems remind me of the books in my Fallen Angel: A Mafia Romance series. I loved this question and found the challenge to be so much fun. I am an avid lover of poetry. So to get to read through poem after poem, trying to find the right ones was just heaven for me.
So, after much thought here are the top 5 picks for poems of Fallen Angel.
1.      Enthralled by Alfred Bryan
Teach me to sin—
In love's forbidden ways,
For you can make all passion pure;
The magic lure of your sweet eyes
Each shape of sin makes virtue praise.

Teach me to sin—
Enslave me to your wanton charms,
Crush me in your velvet arms
And make me, make me love you.
Make me fire your blood with new desire,
And make me kiss you—lip and limb,
Till sense reel and pulses swim.
Aye! even if you hate me,
Teach me to sin.

2.      The Greatest Gift by Alisa Anderson
moving so close in time,
your heartbeat next to mine
wanting you desperately,
you body pressed to me

holding you, loving you,
until this night is through
giving the best of me
the call of our destiny

the greatest gift, i see,
right here in front of me,
your love unconditionally,
it’s all i could want it to be.

The fire consuming us,
our heat is luminous
a mixture of love and lust
our souls so deep in trust

making me feel brand new
passion so pure and true
giving our all, no less
the key to our happiness

The greatest gift, to me
love so exclusively,
so very precious to me
so in love are we.

Closer, we merge
our souls melt into one, as we
move in a rhythm
as old as the sun

the greatest gift, to you
right here in front of you
my love unconditionally,
it’s all you will ever need.

The greatest gift to see
our love a fine symphony
the music plays on and on
forever in priceless song.

She, faded like a wilting flower
She, didn’t know to claim her power
And every minute, every hour
Was stolen one by one

She, faded like a wilting flower
She, didn’t know to claim her power
And every minute, every hour
Was stolen one by one

The little angel left behind
How will she know that love is kind?
How will she ever really find
The truth that’s locked within her mind?

She’s much too young to understand
That daddy’s shouldn’t force their hand
To issue threats or make demands
Is she able to withstand?

She should have lived to tell her tale
She could have told how she prevailed
Maybe she’s finally found her star
I pray, you’re at peace where you are.

4.      Stupid For You by Alisa Anderson
for just a moment
everything is cool
and i am not a fool
and i’m not in love with you

but I play the fool again…

for just a moment
your confession is the truth
and i laugh at you from upstairs
while you’re begging in a phone booth, baby

but then the now sets in
and i take you back again,
my thirst for you is endless
i could drink an ocean of you in

and I know it’s such a sin, but

and i’m drowning into you...

why do i keep letting you
back in my life?
when the pain you put me thru
it cuts me like a knife

everytime i reach the shore
you reel me right back in
i know i’m just a game to you, baby
that you always have to win

so once more it all begins...

and i’m drowning into you
and i don’t know what to do
and i’m feeling so insecure
but i’m so hungry for more.

5. He Will Never Change by Alicia Junkins
I believe in lots of things
But I don't believe he can change
Made me believe I was in the wrong
Made me feel ashamed
When he was the blame all along

well...alisa did stuff and is still doing stuff. only now she has two boys crazy enuff to want her as their mommy. hey, at least she tried to warn them, so her job is done. she doesn’t like to capitalize, partially because she likes how lower case letters look visually, but mostly out of laziness. please don't judge. it could be you. and she would say, hey. you're alright, buddy. you're ok in my book. now c'mere for a hug. the hug might be pushing it. air kiss? you are strangers, after all, with only a mutual love of poor grammar.
​she lives for a world full of controllable anatomically correct, android men programmed to meet her specific feminine needs (wink, wink, nudge, nudge with a big waggle of the eyebrows). who look like the rock. and ian somerhalder. and idris elba. and that's it she promises. variety. gotta have variety, right?
​but alas...apparently that exists only in johanna lindsey's genius mind. so until then, she enjoys her incredibly warped sense of humor. she reads tons of erotica and romantic, drippy goo that makes her heart go pitter patter. then she thought, hey. what, she said to herself. (softly, of course, so no one finds out she is indeed, 2 nuts short of a fruitcake) maybe you should write this stuff too. maybe someone will like it and maybe buy it. so she said, huh, you think? then she said, well...yeah, i wouldn't have suggested it...(inserts sarcastic tone) and then she was like lose the attitude, ok? then she was all, would you just shut up and write, already? sheesh! and she did. :)

Amazon Author Page
http://www.amazon.com/Alisa-Anderson/e/B009IEA6A8
Posted by Nicole Morgan at 4:00 AM